If your patching teams are reporting that they’re exhausted, they’ve got good reason. If you haven’t already, it’s time to invest in automation – regression testing and continuous deployment – to help them cope.

That’s already not great, but the problem is intensifying. Here’s a graph2 of critical and total vulnerabilities published per year. 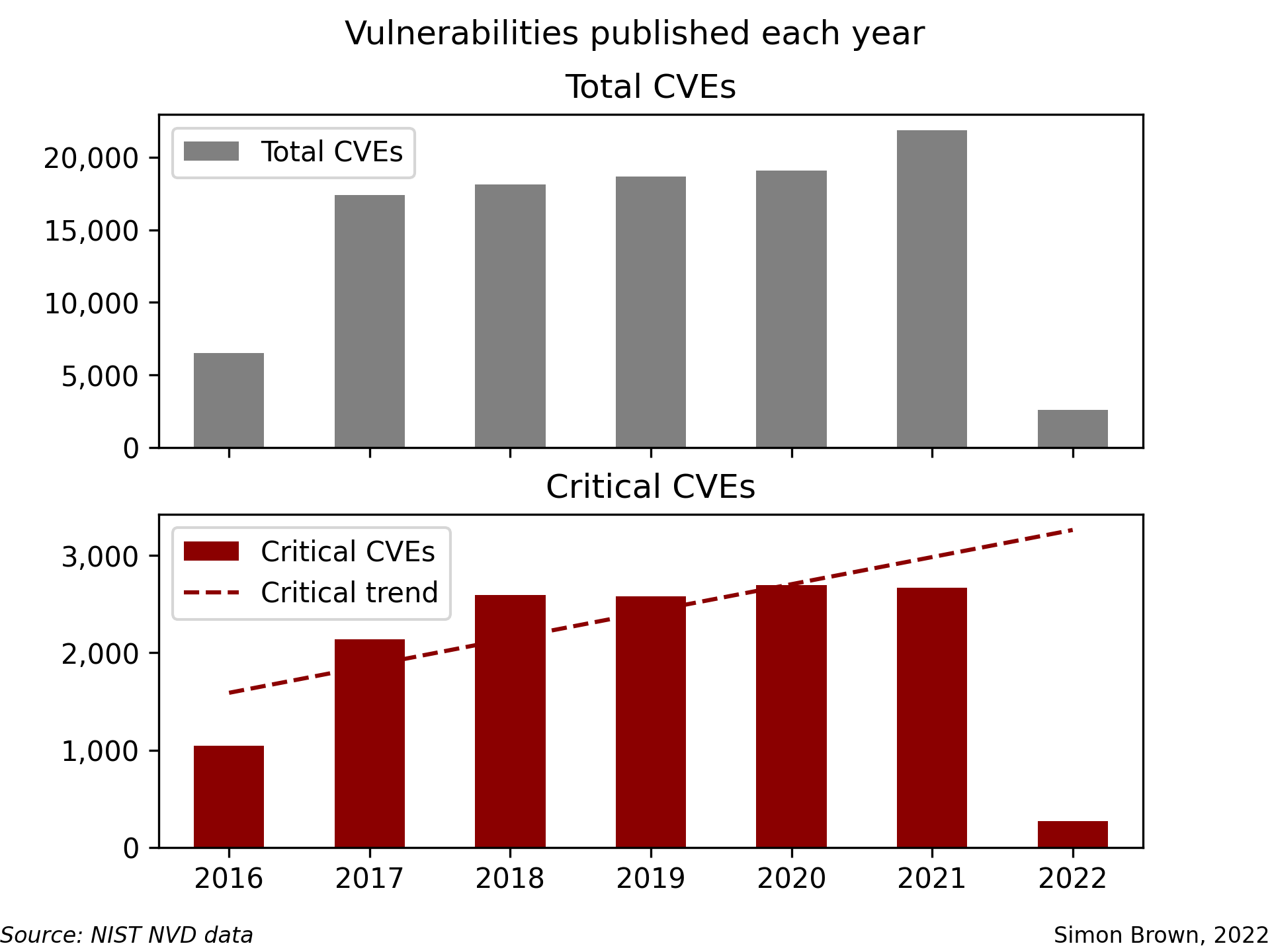 So, how do you deal with this kind of volume?

Problem one: discovering that you’ve got something that needs patching

There are three useful capabilities here, in decreasing utility (and usefully decreasing cost):

The ideal primary control is a comprehensive inventory of your estate. You could then check a daily extract of the NVD against that inventory, and create work tickets for every team that owns a newly-vulnerable component. In an ideal world, your CMDB is even automating this for you. That said, there’s pretty good chance that practitioners will have either scoffed or grumbled when I said “comprehensive inventory”; I’m not aware of an organisation that thinks it has solved this.

Given that nobody fully trusts their inventory, many organisations augment it with scanning. Typically, this is implemented with a vulnerability management system. Network-based VMS are common, but these can struggle with reachability and completeness (particularly if scans aren’t authenticated). With the increasing frequency and severity of library-level issues, it’s also worth augmenting your network VMS with something that’s keeping an eye on vulnerable libraries; one open source option is Anchore’s grype, which can scan container images and file systems.

The third layer of detection is inexpensive but narrow: relying on your vendors telling you, whether that’s through predictable schedules (e.g., Microsoft Patch Tuesday) or mailing lists. That’s probably best thought of as only being for your most critical and/or widely deployed software, given that it’s unstructured data and difficult to scale.

That said, those answers aren’t particularly satisfying. Hopefully, the state of the art in both automated inventories and vulnerability management will continue to improve completeness and granularity.

Once you know you’ve got something to patch, the hard work begins.

Patching teams typically struggle with the volume of required patching because patching processes are traditionally manual and involve a lot of analysis. A typical process might look like:

We can make life easier for ourselves if we make two changes – one cultural, one technical.

The cultural change sounds simple: don’t decide per patch, just patch everything, continuously. If we deploy every available patch, every month, we might have more patching failures but that is offset by freeing up significant time by no longer performing analysis. As a bonus, it also becomes much easier to stay in a supported state.

The technical change requires some capex: automate regression testing and deployment. If you reduce the friction of patch deployment (and roll-backs when necessary), your ability to patch everything continuously dramatically improves.

Those two go together: if you don’t have great regression testing, automatically patching can increase your software supply chain risks.

But where you can implement these two changes, the reward is a much simpler process:

You’re down to two manual processes – kicking off the process, and handling any exceptions.

Migrating legacy applications to pipelines can be an expensive one-off change, but given the increasing number of vulnerabilities every year, it’s worth considering.

My thanks to Cole for providing feedback which helped improve this post.